“It’s not enough to find someone you love. You have to be ready for that love, and ready to make changes to welcome it into your life.”

Ayesha at Last by Uzma Jalaluddin

Goodreads Summary: “Ayesha Shamsi has a lot going on. Her dreams of being a poet have been set aside for a teaching job so she can pay off her debts to her wealthy uncle. She lives with her boisterous Muslim family and is always being reminded that her flighty younger cousin, Hafsa, is close to rejecting her one hundredth marriage proposal. Though Ayesha is lonely, she doesn’t want an arranged marriage. Then she meets Khalid, who is just as smart and handsome as he is conservative and judgmental. She is irritatingly attracted to someone who looks down on her choices and who dresses like he belongs in the seventh century.

When a surprise engagement is announced between Khalid and Hafsa, Ayesha is torn between how she feels about the straightforward Khalid and the unsettling new gossip she hears about his family. Looking into the rumors, she finds she has to deal with not only what she discovers about Khalid, but also the truth she realizes about herself.”

The moment I learned that ‘Ayesha at Last’ is a Muslim Pride and Prejudice retelling, I knew I had to read it, and it didn’t disappoint! Let’s be real, Pride and Prejudice could not be more desi. I wasn’t completely swept away by the romance in ‘Ayesha at Last’, but it was certainly an improvement from the original. At the heart of it, it’s an authentic coming-of-age story with a relatable heroine (Ayesha) and unintentionally charming hero (Khalid) that’ll resonate with Muslim (and South Asian) readers. Unsurprisingly, it’s packed with twists and turns and dramatic reveals that’ll leave your head spinning and, for those of us who are huge Star Plus and Bollywood fans, perfectly satiated. ‘Ayesha at Last’ isn’t blind to the varying degrees of Islamophobia some of us suffer in the workplace too, and plenty of us will have dealt and will deal with our own personal Sheila’s across our careers. I can only hope that it invites more books, ideally in the New Adult and Contemporary Lit genre, to openly explore themes of workplace discrimination.

Though I appreciated Khalid and Amir’s friendship, this subplot could have been better developed. It’s through this friendship that the subject of alcoholism is explored, and while I wholeheartedly believe that this is an area that needs more coverage and I would love to read a book with a character like Amir taking centre stage, it felt out of place in ‘Ayesha at Last.’

Uzma Jalaluddin’s writing is a rare combination of poetic and to-the-point making ‘Ayesha at Last’ both a fast-paced and engaging read. Pascal Pictures has acquired ‘Ayesha at Last’, so fingers crossed we’ll all be able to see it on the silver screen in the near future!

A quick thanks to Suziey @ Of All the Books in All the Libraries (you can follow Suziey on Goodreads here) who introduced me to this book (& plenty more #ownvoices books!).

Ayesha Shamsi reminds me of quite a few Muslim women I know. I actually know a Muslim woman who works at a school and moonlights as a poet. Ayesha is 27 years old, responsible, mature, outspoken, and thoroughly frustrated that she has to take on a teaching job to pay off her debts to her wealthy uncle. Her real dream is to become a full-time poet. It’s a struggle that some of my fellow second-generation South Asian people will relate to. Scratch that, we’re more inclined to pursuing more practical than creative professions. On top of that, her mother is looking to get her married, and Ayesha can’t help but compare herself to her beautiful, young and rich cousin Hafsa who’s receiving a million proposals every other day and has the financial support to pursue whatever career she wants, but keeps flaking on her career goals. Living with her younger brother, widowed mother and her utterly brilliant, witty and savvy Nana and Nani (grandparents), Ayesha still has to act like an older sister to her cousin Hafsa. In short, Ayesha has a lot on her plate. I loved Ayesha’s journey, and the Ayesha we see, at the end of the novel, is refreshing, but… it’s still not something that is possible for every Muslim or South Asian woman. 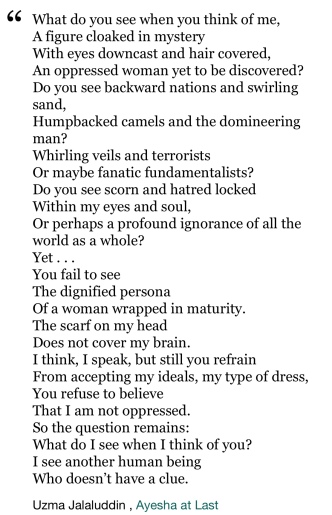 Khalid Mirza is that one pious cousin, that my fellow Muslim brothers and sisters will know, who is painfully, but endearingly oblivious. He’s lovely, he’s sweet, he’s a very obedient son to a terrifying mother (Farzana), and he’s basically a mix of Jon Snow and Mr Darcy. He slowly and gradually discovers what it means to practice his faith. Ordinarily, you’d expect to find a “Should I? Should I not?” debate on wearing the hijab, but I love that ‘Ayesha at Last’ explores men’s Islamic attire – jubba and topi – instead. Khalid was easily my second favourite character – Masood, the Mr Collins to Ayesha’s Lizzy, was not only my fave, but cracked me up so much! -, but I obviously can’t consider him in a romantic sense because he reminds me a lot of my cousin brother. So, go ahead, Khalid is all yours.

And, finally, Hafsa! You know how Greta Gerwig finally gave Amy March her due, well, Uzma Jalaluddin reimagines Lydia Bennet in Hafsa (with Jane Bennet’s beauty) and makes her far more likable (though you might find her irritating at first), sympathetic, and great fun to read!

The chemistry between Khalid and Ayesha just didn’t hit the mark for me, but I think that’s owing to it operating on the faulty premise that is Pride and Prejudice. Or maybe enemies to lovers just doesn’t work for me. I much prefer when their is chemistry from the get-go. However, unlike Mr Darcy and Elizabeth, Ayesha and Khalid do actually interact! Yay! And when they’re not willfully misunderstanding each other a la Bridget Jones and Mark Darcy cooking sesh, they do actually get along really well, and Ayesha can’t help but mercilessly tease Khalid which is really cute. But were there sparks flying and that feeling of warm contentment? I, personally, didn’t feel it, though that might be because Ifemelu and Obinze (Americanah) set the bar too high for me. Weirdly, it was the surprise romance twist at the ending, which, really, is a business partnership if we’re being real, that did wonders for me… I LOVED it! It was one of the most positively surprising endings I’ve read in a while! It came out of nowhere, but I 100% believe it’d work.

A PLOT READY-MADE FOR STAR PLUS

The plot essentially revolves around Ayesha, taking over on behalf of AND pretending to be Hafsa (who bailed out), and Khalid who, tasked by Imam Abdul Bari, are planning a conference for the masjid (mosque) to engage younger Muslims because the masjid is in desperate need of money. I thought this premise in itself was thought-provoking, and it actively reminded me to think about how younger Muslims are connecting to the deen through their local masjids. You know how libraries are the heart of many communities? Masjids are that for Muslims. We have Friday prayer (Jummah) where khutba’s (sermons) are given as well as other local community gatherings, talks, weddings and funerals. Men observe the Taraweeh and Eid prayers, and they celebrate Eid with their fellow brothers in Islam at the masjid. Masjids build communities, and it was refreshing to see it playing a huge role in ‘Ayesha at Last’.

As the story progresses and Tarek Khan is introduced, we learn more about what happened to Khalid’s sister, Zareena, and more about his mother, Farzana. Farzana is textbook Kokila Modi (from Star Plus’s ‘Saath Nibhaana Saathiya’). We’ve all met a desi aunty like Farzana who goes beyond being a mere gossip to a fully-fledged petty and scheming villain. Almost everyone has beef with Farzana culminating in a dramatic showdown which will leave you feeling conflicted about whether or not it was deserved. It sucks to say this, it may not be a popular opinion, but sometimes the harshest measure is the only remaining option.

Some might argue that the character of Farzana as an evil desi aunty is stereotyping. I disagree. Our stories and characters aren’t required to be palatable to white audiences. Our only hope is that they should feel real and make us feel seen and heard. Uzma Jalaluddin succinctly summarises this:

“As a writer, my primary responsibility to readers is to write a story that is entertaining, and authentic.”

Uzma Jalaluddin, excerpt from an interview

What are your thoughts on Ayesha at Last? Should Islamophobia and race discrimination in the workplace be more explored in fiction? Are AOC (authors of colour) responsible for challenging stereotypes in books? What are your recommendations for books featuring Muslim romance? Let me know in the comments!

& if you should feel so generous, why not…