“You don’t know what you’re doing. You’ve never been here before. You wanted something different to what your parents had, but no one gave you a guide. You are undecided, caught between wanting something and knowing you might never have it. You are Generation have-it-all (that’s why your parents immigrated, after all) but you just don’t know how to have it all.”

Sofia Khan is Not Obliged by Ayisha Malik

Goodreads Summary: ‘Brilliant idea! Excellent! Muslim dating? Well, I had no idea you were allowed to date.’ Then he leaned towards me and looked at me sympathetically. ‘Are your parents quite disappointed?’

Unlucky in love once again after her possible-marriage-partner-to-be proves a little too close to his parents, Sofia Khan is ready to renounce men for good. Or at least she was, until her boss persuades her to write a tell-all expose about the Muslim dating scene.

As her woes become her work, Sofia must lean on the support of her brilliant friends, baffled colleagues and baffling parents as she goes in search of stories for her book. In amongst the marriage-crazy relatives, racist tube passengers and decidedly odd online daters, could there be a lingering possibility that she might just be falling in love…?

This was a very fast-paced and light read! I hope Sofia Khan is Not Obliged is the start (well, it was released in 2015) of an era of diverse fun reads. The Muslim dating scene is ripe for the taking in book publishing, and I’m excited to read more diverse books on dating now. Let’s get straight to five things I liked about Sofia Khan is Not Obliged!

Sofia Khan is recently single after breaking off an engagement to her fiancé, Imran, who’s a little too close to his parents, or who she commonly refers to as: ‘Hole-in-the-Wall.’ Sofia is a 30-year-old British-Pakistani Muslim who lives with her family and works in publishing. Her boss convinces her to write a book on the Muslim dating scene where she meets a string of eligible men, getting close to a few, especially one, and as far away as possible from the others. In the midst of dating around, she develops a close friendship with her Irish neighbour, Conall.

Look, I am personally hesitant about “defying stereotypes” because it is, in essence, pandering to a white audience: “see me, hear me, accept me!” But then I’m also torn between the fact that if we basically want to survive and avoid racist and xenophobic attacks… actually, I’m not going to complete that sentence because it’s pretty messed up that I have to prove that I’m not the T word or beg for my humanity to be recognised. You get this whole undercurrent simmering between the pages and it did frustrate me at times that I could feel that ever present need, from Sofia herself, to prove that she is not one of *those* Muslims. Despite this, there were parts which had me beaming with happiness. Sofia Khan observes prayer, she doesn’t abandon her hijab (ugh! Who am I to talk?), and she doesn’t discard Islam for anyone. In fact, it’s Sofia who has to teach Conall to be a little more peaceful (but I still actually preferred Conall, sorry, Ayisha Malik).

3. Sofia Khan is Writing a Book on the Muslim Dating Scene!

“What a luxury anything organic is: to take your time; to have the lived experience. To hear what a person has to say about love and say, ‘Yes! I know that feeling. It shattered my soul and it was beautiful…’”

Albeit reluctantly. The Muslim Dating scene is wild! *Not that kind of wild* *side-eye* Anybody who’s in their 20’s/30’s will have seen first-hand or heard all these crazy stories, and this book burns through the typical scenarios all at once. To complement this, Sofia has an interesting and a varied group of friends and a sister who’re all experiencing romance in wildly different ways. We’ve got a second wife, divorce, a potential divorce, and interracial dating, be it through dating apps or speed dating and more! Now, I can picture some readers snobbishly smirking: “A second wife? That’s not defying stereotypes now, is it?” Please, a lot of us know someone who’s a second wife or have heard of it from their friends/family. That’s just is how the dice rolls, and we don’t need to appease anyone. Getting back on track, as I said before, the Muslim dating scene is jam-packed with the most fascinating, bizarre and hilarious stories. It’s this part especially that makes me wish that someone finally buys the rights to Sofia Khan is Not Obliged or even better… Love is Blind, but make it Muslim. Or! Dating Around, but make it Muslim… & make it sponsored by Muzmatch. (Also, anybody got Muzmatch stories to share? Spill the tea, sis!) 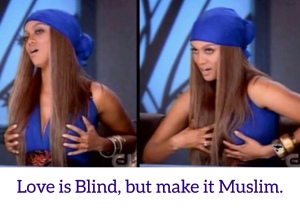 And that’s all she wrote. Kidding! Unless you’ve read the book, you’ll know that it’s all I really needed to say. Anyway, Conall is dreamy, guys, he’s so dreamy, aaahhhhh!!!!! He’s so brave, strong, good, and a teensy bit moody. You know what the weirdest thing is though? Because Sofia, her family and her friends are South Asian… I couldn’t stop pronouncing Conall as Kunal! I couldn’t stop. I’m not sure how to pronounce Conall properly, so he will have to remain as Kunal for now. Decolonisation! Kunal is basically Mr Knightley which if you’ve read my Top 5 Fictional Boyfriends, you can see why I liked him so much. A whole book with Muslim guys, and I’m feeling Kunal. In my defence, when you read Sofia Khan is Not Obliged, you will have no choice but to understand.

5. Sofia is Not Perfect

“Forget him, I rationalised to myself, you should be used to racist abuse. Such flimsy words make no difference to me. It was a decent rationale, but didn’t quite do the job of putting my world back to balance.”

Our heroine, Sofia Khan, is both fun, optimistic and flawed. She’s not a perfect person. She lets a lot of things slide that I could never – like microaggressions in the workplace and that racist passenger on the Tube (how many of us have stories to share on dealing with racism on the Tube? *the Tube is basically a Subway for any non-Brits reading this*). I’m not taking it, if you’re going to get physical or huff and puff in my face, I’m not staying quiet. Kunal has to teach Sofia to care and stand up for herself. Sofia mostly deals with these microaggressions with humour using it as a coping mechanism. Then again, I realised it’s also pretty realistic. South Asian people can sometimes believe that they’re immune to racism and bury their heads in the sand. Sometimes, it’s basically: “It can’t be racism! Because then I’d have to deal with that realisation, and I’m not ready for that.” Or it’s: “Rise above it.” I can’t agree with the whole “when they go low, we go high.” Just FYI, it’s usually South Asian men my age or older more likely to adopt this line of reasoning. Needless to say, Sofia can be frustrating at times, but she’s mostly a light-hearted and witty woman which makes this a fun and fast-paced read!

I can see some readers not being totally satisfied with the just-about-scratching-the-surface on race issues, but, ultimately, Sofia Khan is Not Obliged is a light-hearted romance, and not every #OwnVoices book has to delve deeply into the nitty gritty complexities of race. On a final note, don’t be fooled by the high page count, a lot of text messages and emails account take up a lot of space in this book!

I’m going to love you and leave you with one of our finest Muslim memes:

What are your thoughts on Sofia Khan is Not Obliged? Can you recommend any books on the South Asian/Muslim dating scene? Have you got any funny or bizarre dating stories? Have you ever experienced racism/microaggressions on the Tube/train or workplace? Let me know in the comments!

& if you should feel so generous, during this pandemic, why not…