Continuing on with Part Two of 3 Thoughts on Harry Potter and the Prisoner of Azkaban, I will tackle the Scabbers vs Crookshanks debacle in this post. If you’ve missed part one which focuses on why the book is better than the film, you can read it here. 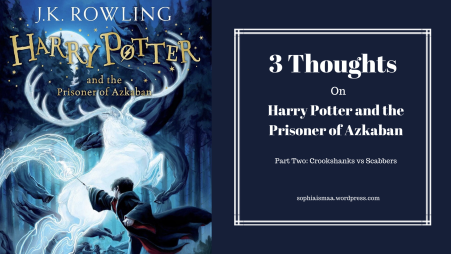 Weighing in on the Scabbers vs Crookshanks Debacle

In my opinion, Hermione was wrong, regardless of the fact that Scabbers turned out to be Peter Pettigrew because neither Hermione nor Ron knew that at the time. The entire fall-out between the pair is a result of Hermione buying Crookshanks in the first place disregarding Crookshanks threatening manner towards Scabbers. This led to some readers focusing solely on Hermione’s pain during the fall-out, an outright denial that Ron was justified in his anger towards Hermione and a failure to acknowledge Ron’s suffering. By doing so, we descend into a victim-blaming space and Hermione playing the victim to circumstances she created made matters worse. It might be assumed that this is attributed to the fact that the last impression that is left on readers is the discovery that Peter Pettigrew is Scabbers, so previous actions are forgotten.

Hermione eventually apologises to Ron after Ron breaks the ice by offering to help Hermione with Buckbeak’s case, so there is little reason to hold Hermione to something she has apologised for. Moreover, it’s clear that she did not intend malice.

What is troubling is the reactions of some fans who fail to hold Hermione accountable by claiming that she had not done anything wrong at all, as if to do so amounts to renouncing Hermione Granger altogether. Further, this demonstrates a lack of understanding of the proper etiquette regarding the responsibility of pet owners. It can, also, be assumed that a large part of the vilification of Ron, in this book, arises from a choice-supportive bias and selective perception favouring Hermione.

The entire fall-out between Ron and Hermione can be traced back to the moment Hermione buys Crookshanks, to keep as a pet, despite having witnessed Crookshanks behave in a threatening manner towards Scabbers. “Ron buckled as something huge and orange came soaring from the top of the highest cage, landed on his head and then propelled itself, spitting madly, at Scabbers.” Scabbers, in turn, “scarpers for the door.” (p. 63, PoA) Ron expresses his dissatisfaction with Hermione’s decision to buy Crookshanks as the cat “nearly scalped” him to which Hermione responds that Crookshanks “didn’t mean to.” Ron raises questions regarding living arrangements as Scabbers and Crookshanks will have to share space and Hermione assures Ron that Crookshanks “will be sleeping in my dormitory and Scabbers in yours [Ron’s].” She adds that Crookshanks had “been in there for ages: no one wanted him.” Ron responds: “I wonder why.” (p. 64, PoA)

The ordinary reaction to a cat attacking your friend’s pet is certainly not to go and buy the cat which will cause potential distress to both your friend and his/her pet. Crookshanks poses a clear threat to Scabbers. Hermione trivialises this threat by stating that Crookshanks didn’t intend to do so and what follows is a series of events where Hermione doesn’t intend to cause harm to Ron and Scabbers, but unintentionally does so. Picture this: you meet a stranger and they are incredibly rude and threatening to you and your friend is a witness to this. Your friend, knowing this, strikes up a friendship with the stranger and trivialises their rude and threatening manner. They continue to be rude to you and your friend carries on making excuses for the person. How would that make you feel?

We can easily infer that the reason Hermione sympathised with Crookshanks because of how similar she was to Crookshanks at the start of the series. “No one wanted him,” makes a reference to Hermione’s initial failure to make friends in The Philosopher’s Stone. Ron replies: “I wonder why,” referring to Hermione behaving condescendingly to her peers by calling them “childish” and directly implying that Ron and Harry are stupid because they “don’t use” their “eyes.” In Moyatori’s recent post, she discusses a character who regards her peers as unintelligent when, in actuality, this belief stems from her inability to fit in. This brought Hermione, in the first book, to mind, which explains why she develops a bond with the unwanted Crookshanks.

Hermione raises a fair point that their respective pets will be residing in their respective dormitories, thus it should not be a cause for concern. However, as the book progresses, we see Scabbers and Crookshanks in the same vicinity multiple times which enables Crookshanks to make several attempts to attack Scabbers. One incident includes Crookshanks chasing Scabbers who runs for cover “beneath an old chest of drawers” and Crookshanks begins “making furious swipes beneath the chest of drawers with his front paw.” (p. 154, PoA) Hermione explains that Crookshanks “doesn’t know it’s wrong” and that “all cats chase rats” to which Ron replies “Scabbers was here first.” (p. 154, PoA) Again, this reinforces that the issue stems from Hermione purchasing Crookshanks in the first place. Knowing that Crookshanks behaved threateningly towards Scabbers during their initial meeting, it becomes Hermione’s responsibility to ensure that the threat to Scabbers isn’t realised by ensuring that Crookshanks isn’t given the opportunity to attack Scabbers.

The Prisoner of Azkaban brings Hermione’s lack of empathy towards her peers’ pets to the forefront. Hermione can be empathetic, but her empathy and basic propriety are greatly lacking if she disagrees with an individuals reasoning. This is evident when Lavender receives news that her rabbit has been killed. Lavender believes that Professor Trelawney’s prediction that the thing she’s been dreading will come to fruition on the date specified by the Professor. Hermione questions the logic behind this prediction as Lavender’s rabbit is merely a baby, hence it is unlikely that Lavender would dread the rabbit’s death and Parvati glares at Hermione in response. “Well, look at it logically,” said Hermione, turning to the rest of the group. “I mean, Binky didn’t even die today, did he, Lavender just got the news today –“ Lavender wailed loudly “- and she can’t have been dreading it, because it’s come as a real shock –“ “Don’t mind Hermione, Lavender,” said Ron loudly, “she doesn’t think other people’s pets matter very much.” (p. 156, PoA) Hermione is right, but this was not the appropriate time and place to do everything short of hanging a banner that says “Lavender, you’re stupid.” It’s tactless and demonstrates Hermione’s lack of empathy towards the grief of a pet owner. Any individual with a single grain of common sense and basic good manners would know to let people be in their grief as long as it isn’t harming anyone.

As Scabbers eventually goes missing, believed to be dead and most likely killed by Crookshanks given the overwhelming evidence, Hermione not only stubbornly refuses to apologise, she, also, doesn’t comfort Ron for the loss of his pet that he’s had for years either and, instead, plays the victim: “Everything’s my fault, isn’t it!” (p. 269, PoA) Everything pointed towards Crookshanks having murdered Scabbers: Scabbers goes missing, the trio find blood on the sheet that Ron holds up and “several long, ginger cat hairs” (p. 267, PoA) that were lying on the floor.  It’s natural that a teen would evade responsibility e.g. when we’ve taken our siblings clothes. It is, however, odd to maintain stubbornness in the face of overwhelming evidence in a matter so serious and allow that to take precedence over comforting your grieving friend. Further, Ron was the only person to defend Hermione when she was mocked by Snape. Ron cares enough about Hermione to risk detention/serious trouble to stand up for her against a teacher, whereas Hermione doesn’t care enough about Ron to buy a different pet, apologise nor console Ron for his loss.

J. K. Rowling, bizarrely, has Hagrid acting out of character and hypocritically to twist the narrative in Hermione’s favour. Hagrid states that Crookshanks “acted like all cats do” (p. 291, PoA), an odd thing for Hagrid, a character so passionate about animals, to say, especially when it concerns violence against animals. It is unrealistic for Hagrid to swiftly dismiss the murder of a pet. It is in this same book that Hagrid is on unfriendly terms with Draco and Lucius Malfoy for the mandated execution of Buckbeak. Similarly, if Hermione told Hagrid to get over it, that Buckbeak was dangerous and, hence, likely to attack Draco, Hagrid would be less than pleased. Rather, he would be greatly hurt.

Hermione was wrong. Hermione apologised. Some fans, however, refuse to acknowledge that she was wrong in light of the revelation that Peter Pettigrew is Scabbers. I like Crookshanks, he is the animal equivalent to an MI5 Agent. However, it doesn’t change the fact that neither Ron nor Hermione knew at the time that Scabbers was Peter Pettigrew, so it was unfair for Hermione to purchase Crookshanks having witnessed him act in a threatening manner towards Scabbers. Secondly, she failed to keep a close eye on Crookshanks to ensure the threat wasn’t realised. It is frightening to see that some fans believe that Hermione did no wrong in this pet debacle and brings into question their responsibilities as a pet owner to ensure the safety of other pets.

The moral of this storyline? I will venture into more colloquial terms: actions have consequences, suck it up.

What are your thoughts on the Crookshanks v Scabbers pet drama? Who was wrong/right and why? Let me know in the comments! FYI, I would love to debate and I’m willing to hear different perspectives so long as it is done in a respectful manner and opinions are based on fact and clear logical reasoning.