When I’m not reading books, I’m watching TV shows. Just kidding, I watch more than I read (when a book just isn’t doing it for me)! And how can I not when there are so many refreshingly different shows available? And thanks to Sana @ Eleven Eleven for reminding me that there are other amazing ways which we can fill our time with including watching shows. Here are the nine shows I’m currently obsessed with (and be warned, there will be spoilers!):

A group of single celebrities join an exclusive dating agency in a bid to find true love. As the agency opens its doors, the single stars date members of the public in the hope of finding the one.

Sadly, season 5 has now reached its conclusion, but I have very much enjoyed it and especially because of Olivia Atwood who was drunk throughout almost the entire show. Really, this season was worth watching just for Olivia alone! Olivia and Sam broke the rules this season and picked each other for the finale and I’m not going to lie, I did feel a little emosh. Just a tad. Having said that, nothing can compare to the rollercoaster ride that was season 5 which featured Frankie Cocozza and the ridiculously fun Charlotte Dawson who also broke the rules and picked each other at the end! 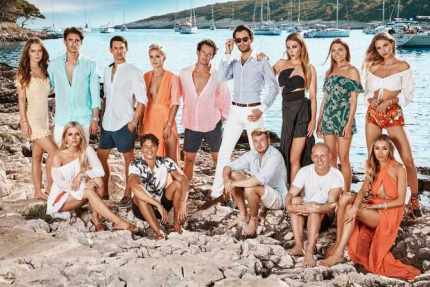 Lives and loves of a group of twenty-somethings who live in and around London’s exclusive postcodes.

By “exclusive” they mean very, very, very posh. This is a reality show where everyone knows each other’s business and when they don’t, they make it their business to find out and spill the tea!

This season has been entertaining so far. We’ve had ‘I’m going to make puppy dog eyes, so you feel sad for me and forgive my fuckboi tendencies’ Sam pursuing Habbs, who, by the by, is so out of Sam’s league. We’ve also been seeing a realistic portrayal of the stages of a break-up from Olivia and Digby (I mean, what a posh name, indeed!) as well as couple Louise and Ryan sticking their nose in and interfering when they can. Ryan has received backlash from viewers for his brash critique which I found confusing because almost every single person on Twitter had literally been voicing the same thoughts until Ryan had the guts to say it to Olivia’s face! The irony, eesh. Fine, okay, his delivery could have been better, but what he said made a lot of sense.

I would love to see the return, or even a cameo, of Lucy ‘Queen’ Watson one day because she will always be my favourite. Anyway, here’s an old and legendary clip:

Season 10 is the final season and ooh, boy, did it create a ruckus when the producers foreshadowed a major character death and we all quaked in our boots, readying ourselves for the death of Jay Pritchett, and what happened, huh? It was a minor character! I don’t care, thank God, because I love Jay!

I’m eagerly waiting to see what happens with Hailey’s storyline because I have no idea who she is going to pick, but, honestly, as Ted Mosby rightly said, shouldn’t Hailey be head over heels for one guy as opposed to struggling between two? If anything, I thought she’d end up with Andy, but, erm, I guess they can’t get their hands on the actor who seems to be quite busy!

I really wish the show would go on because the premise has longevity and I’m not ready to say goodbye!

Again, another show on its final season! This season has been comparably better than the last for me, personally, because I love Howard and we’re finally getting to see more of him and his earlier humour. He’s been overshadowed at the expense of more of Penny & Leonard and Sheldon & Amy which has been frustrating for me because Howard is my favourite character.

I’m also loving Raj’s arranged marriage storyline and I can’t wait to see what will be the end result. I hope we get to see a little more of Sheldon and Amy’s hilarious social experiments which they explored last season. It was interesting to see Penny opting out of motherhood and the show portraying something as relevant as this.

I loved Part 1 on Netflix and, so far, I have to say Part 2 could be a lot better. Janelle James opened the show and her stand-up routine has been my favourite of the 5 episodes I’ve watch so far. Janelle has such a ‘I’m not impressed’ vibe and even if you disagree with some of her opinions, you find yourself laughing anyway and saying: “Well, she does have a point!” Matteo Lane was hilarious too. He opens up about gay romance in the digital age, and his obsession with Lindsay Lohan’s Instagram had me laughing my ugly laugh (you know someone is funny when they make you ugly laugh)!

How to Get Away with Murder

Annalise Keating, a brilliant, charismatic and seductive professor of defense law, teaches a class called How to Get Away With Murder. Annalise, also a criminal defense attorney, selects a group of students — the best and the brightest — to assist with cases at her firm alongside her employees, the trustworthy and discreet Frank Delfino and Bonnie Winterbottom, an associate attorney. Mysteries arise that test everyone’s limits and reveal dark truths.

I think this tweet below pretty much summarises the show. 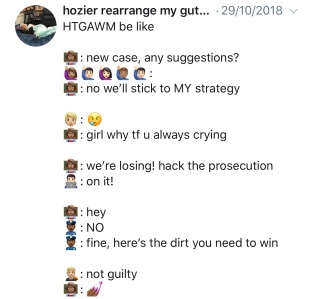 I cannot express how angry I was to see the sneak peek at the end of the last episode where the show revealed who dies this season because my mind went: “Hold up! After all you put us through last season? We went through the best episode of the last season and probably the show’s overall best episode for this to be the end result?” I know there’ll be a gut-wrenching reason for the death, but I am not ready for it.

Otherwise Michaela is, as always, walking around in her typical ‘I’m stressed’ fashion (if you’re on Twitter, you’ve seen the video already) and every episode I fall more in love with Connor. Nobody lay a finger on him! And Gabriel Maddox is serving some serious eye candy which helps a whole lot, I mean the whole cast is, look at their faces! 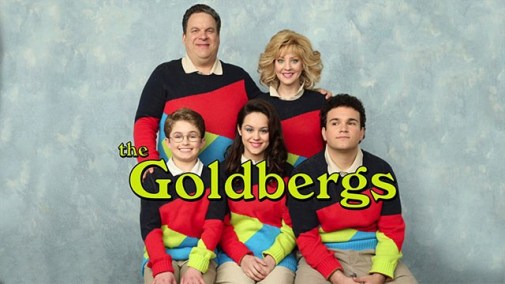 In the 1980s, geeky 11-year-old Adam uses a video camera to document his family’s crazy life.

Ah, this season could be a lot better. I wish they would stop recycling the “I’m your momma who can never let you be independent because otherwise I will no longer be in your life” storyline because it’s present in almost every episode. Can we please get more Barry Goldberg, our insane, impractical, rapping Michael Scott, and some more of Lainey? Otherwise, I’m loving Erica’s progression into a struggling adulthood and feeling all the feels that she’s feeling. So many feels. 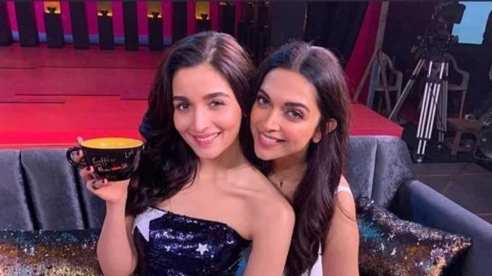 Karan Johar hosts celebrities as they reveal gossip and their secrets.

My Bollywood obsessed followers (are there any here?) know what I’m talking about! Deepika and Alia’s episode has been my favourite so far because it shows how – even in this deeply competitive industry where actresses are, sadly, dispensable – the nation’s most popular actresses can sit down on the same couch and have a chat! Alia Bhatt (pictured left) is currently dating Deepika Padukone’s (pictured right) ex-boyfriend Ranbir Kapoor which I’m sure helped to get the viewers on board to watch this episode.

I am not entirely sure, as of yet, how I feel about Aamir Khan’s episode. Aamir Khan is the reigning Bollywood box office king and his film Thugs of Hindostan was recently released. In this episode, both Karan and Aamir discussed the #metoo movement which has finally reached India. Actresses have come out and spoken up about the sexual assault(s) and harassment they suffered at the hands of top directors and others in the film industry. Aamir recently walked out of a film and refused to work with a colleague accused of sexual harassment. However, in the episode, Karan touted that Aamir got the ball rolling by doing this which displaces the narrative and the courage of the women who have spoken up as Aamir actually agreed with Karan Johar. I don’t believe he fully intended it to come across this way, but rather he believes that his refusal, as one of the India’s most popular and influential actors, he has created an example for others to follow. So, I’m on the fence on this. He definitely should have phrased it better, but I do believe that Aamir must realise that the court system doesn’t always grant justice, and that we should believe women anyway and refuse to work with accused individuals if there is a reasonable belief in the accusations.

I saved the best for last. No show has ever made me ugly laugh so much. I love dares and all things silly and this show is everything! This is my favourite show, and, yes, I love it more than Friends. This and Game of Thrones = Faves.

Bonus: I’ve watched an episode of Hasan Minhaj’s Patriot Act and I found his commentary on Amazon and the company’s monopoly and unethical practices very enlightening. I can’t wait to watch more! And thank you so much, Tiara @ MutedMouthful for bringing it to my attention.

Which shows are you currently loving? Are you watching any of the shows I’ve listed? What other shows would you recommend to me? I would love some comedy, mystery and reality TV recs, so let me know in the comments!