Percy Jackson and the Lightning Thief by Rick Riordan

Percy Jackson is a good kid, but he can’t seem to focus on his schoolwork or control his temper. And lately, being away at boarding school is only getting worse – Percy could have sworn his pre-algebra teacher turned into a monster and tried to kill him. When Percy’s mom finds out, she knows it’s time that he knew the truth about where he came from, and that he go to the one place he’ll be safe. She sends Percy to Camp Half Blood, a summer camp for demigods (on Long Island), where he learns that the father he never knew is Poseidon, God of the Sea. Soon a mystery unfolds and together with his friends—one a satyr and the other the demigod daughter of Athena – Percy sets out on a quest across the United States to retrieve Zeus’s Master Bolt, reach the gates of the Underworld (located in a recording studio in Hollywood) and prevent a catastrophic war between the gods.

I thoroughly enjoyed this book and most of it is down to the characters, especially the trio – Percy, Annabeth and Grover. This is an action-packed read and though it did slow down halfway through, I enjoyed learning more about the mythological heroes, heroines and the monsters alongside Percy. The world-building was straightforward and instead of being bombarded with info dumping, we are treated to a gradual learning course in mythology though I am still yearning to gain more in-depth knowledge and hear more stories. And it also helped that Camp Half-Blood was incredible, and I can safely add this to my list of magical settings I would like to visit!

What I loved most about the Lightning Thief is the trio. I found Percy extremely relatable and the 11-year-old version of me would have related strongly with Percy. Percy is a fiery character, he has poor control over his temper and is ready to stand up against bullies. Further, I carried out some research and found out that during the process of writing the first book in the series, Rick Riordan’s son was experiencing learning differences in school namely dyslexia. In the series, most ‘demi-gods’ suffer from ADHD and as you know, ADHD and dyslexia are often paired together. I thought it was exceptionally wonderful for Riordan to have a main character who suffers from ADHD and dyslexia and turn it into strengths instead. Individuals with ADHD tend to fare better in a crisis and Percy showed a clear dexterity and superb problem-solving skills in his duels with monsters and a particular ‘god.’

“I have moments like that a lot, when my brain falls asleep or something, and the next thing I know I’ve missed something, as if a puzzle piece fell out of the universe and left me staring at the blank place behind it. The school counsellor told me this was part of the ADHD, my brain misinterpreting things.”

Annabeth and Grover were the perfect two to complete the trio. Each character in this trio brought their own individual strengths. Annabeth Chase is intelligent, strategic and always has a plan. She also loves architecture which I hope is further explored as the series progresses. Grover Underwood is emotionally intelligent, easily picking up on the feelings of others and to top it off, he is an environmentalist and possesses a strong affinity to animals. Percy is brave, adaptable and alert in a crisis. With a trio like this, you have three excellent role-models for both children and adults alike and what I especially love is that they all have their own special set of skills. At this point, it would be difficult to pick a favourite character.

“He [Grover] walked funny, like every step hurt him, but don’t let that fool you. You should’ve seen him run when it was enchilada day in the cafeteria.”

Though I didn’t read the blurb provided by Goodreads – I only read the blurb on the actual book – it didn’t take me long to deduce that Percy is the son of Poseidon as the clues were laid out rather unostentatiously, but this is not a complaint either. The mystery surrounding the traitor friend based on the prophecy delivered to Percy by the Oracle was also easy to piece together. The conversation between Luke and Percy at the car wash pretty much gave away who the traitor is, nonetheless the prophecy was great fun trying to work out! 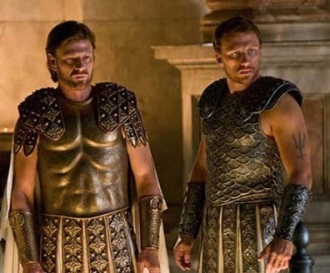 Upon the introduction of Ares, ‘god of War,’ I experienced a full-blown crush where I felt an immediate need to surround myself with fans. I mean the guy was seriously hot… but then I realised that he’s all brawn only. But the introduction of Zeus and Poseidon left me in a conundrum because I was crushing on both of them at the same time! Poseidon is level-headed and calm, and Zeus is much more authoritative and a teensy bit dramatic. I don’t ordinarily crush on characters as most men in fiction are not usually my preference and then to get three hot guys all in one book? Somebody call 911, I have a fire burning in my heart.

One disappointing aspect of the book was the portrayal of Medusa. When Medusa is introduced, she is dressed in a burqa and I didn’t expect to experience religious and cultural appropriation in a children’s book unless, of course, the origins of the mythological creature supports it. This was jarring because amongst the monsters Percy encounters, Medusa was the most intriguing and the tale she relayed about her history was so captivating that I could hardly peel my eyes away.

Percy’s underlying motive to journey to the Underworld is to rescue his mother. The love between mother and son here was truly heart-warming. It is clear that Sally Jackson hasn’t had the easiest of times and she suffers much for the safety and sake of her son and it is beautiful to see Percy undergo so much agony and harm, in return, across the country, so he can retrieve his mother. An interesting thing to note is that while Percy wants to rescue his mother from his vile and atrocious step-father, he understand his mother when she says that she has to be the one to do it herself. This is an empowering message, yes, we must help others, but the decision to help their own selves belongs entirely to the individual.

“All I want,” I said, choking back my tears, “is to see my loving stepfather again. Every time I saw him on TV, calling me a delinquent punk, I knew … somehow … we would be okay. And I know he’ll want to reward each and every person in this beautiful city of Los Angeles with a free major appliance from his store. Here’s the phone number.”

Can someone recall and/or explain when Percy returned the helmet to Hades because I have no recollection of this ever happening? Also, how can Percy do all of that and Dionysus still get Percy’s name wrong? Peter Johnson, my foot. Put some respect on his name, Mr D.

This was a highly enjoyable read and I cannot wait to dive back into the series with the next book. Perhaps, by the end of the next book I should finally have a favourite character.

What are your thoughts on Percy Jackson and the Lightning Thief and your overall thoughts on the Olympians series? Who is your favourite character from the series and why? If you have any book recommendations on mythology, possibly one with pictures, do let me know in the comments!

In other news, I had quite a relaxing break, got a bit of reading done and I noticed something strange: I was able to enjoy reading more when I wasn’t stressing about writing a review about it. I’ve missed you guys and I hope you’ve missed me too! As Eid will already have happened when this is published on Thursday, I wish you a belated Eid Mubarak to my fellow Muslim bloggers.

-Let’s talk all things books on Goodreads
-Talk politics, books, TV shows, blogs and life with me on Twitter