Story: When Mary Boleyn comes to court as an innocent girl of fourteen, she catches the eye of Henry VIII. Dazzled, Mary falls in love with both her golden prince and her growing role as unofficial queen. However, she soon realises just how much she is a pawn in her family’s ambitious plots as the king’s interest begins to wane and she is forced to step aside for her best friend and rival: her sister, Anne. Then Mary knows that she must defy her family and her king and take fate into her own hands.

A rich and compelling novel of love, sex, ambition, and intrigue, The Other Boleyn Girl introduces a woman of extraordinary determination and desire who lived at the heart of the most exciting and glamourous court in Europe and survived by following her heart. 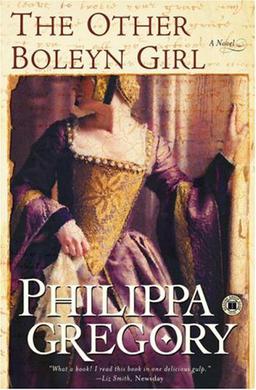 Let me just start by saying that I LOVED THIS BOOK! I know a book is good when I either can’t stop turning the pages or take my sweet time to read it because I do not want it to end. In this case, it was the latter. This was the first novel I read on the Plantagenets’ and being a huge lover of historical fiction and deeply intrigued by the enigmatic Anne Boleyn, its certainly made me want to read more about the Tudors. What better way to start than with Anne Boleyn, the most controversial of Henry VIII’s wives.

The story is told from the perspective of Mary Boleyn, the ‘forgotten sister.’ I didn’t know of Mary’s existence before this book nor know much of George’s other than being tried and executed for incest. Mary, at the start, is naïve, innocent and a pawn in the family’s ambitions and finishes by seizing and taking her happiness in her own hands whilst remaining pragmatic. It’s hard to not like her. Yes, even when she takes the king as her lover whilst remaining sympathetic and devoted in her heart to Queen Katherine. Ambition is the underlying motive of the courtiers and you cannot say Mary did not try to argue for her loyalty to Queen Katherine. Although, I do feel that if she was truly loyal she would have prevented herself from falling for the king (the least you can do).

Viewed from Mary’s lens we get to view Anne in a more intimate light. I’ve read online about how Anne is usually presented in either one of the two extremes. As I don’t know if I have seen a more balanced portrayal, I don’t have a framework to work with e.g. fanbases dedicated online to Anne Boleyn. Did I like Anne? No. Did I sympathise with her? No, not until the very end where you cannot help but sympathise with her and the mental torture she must have undergone. I mean, execution… really? If he can annul and exile Queen Katherine, why could he not do the same for Anne? The reason given was that Henry could not stand for Anne’s hatred if she were to be kept alive. I guess, that’s the price you pay for dogged ambition and ruthlessness. I sense karma at work. I feel bad for even saying this, to be honest. But you cannot deny the pain and suffering she inflicted on Queen Katherine whom I really admired for her dignity. When you assist in putting idea’s in a king’s head that divine law and king are one, you open the country to a reign of tyranny. And if you are not the king, do not expect that you will not suffer from that tyranny yourself. Anne failed to see the consequences of her actions.

What I did admire about Anne was her unwillingness to put up with Henry’s crap because why should she? Perhaps, the way she went about it was not the most effective in the late stages of their marriage. He was no longer young to hold the energy required to deal with Anne’s temper. I was disappointed that Anne changed tack and decided to be more patient and tolerant with his ways. It was almost shredding whatever bit of self-respect she had left.

Anne Boleyn is portrayed as ruthless, manipulative, ambitious and determined. It seems ludicrous that Anne employed all the energy and charm she had to become Queen and in the end, it rested on her ability to provide a male heir. To lay your life on chance is highly risky for the prize of Queenship that she realised, once she became Queen, didn’t even make her happy.

Every bit of rumour and speculation surrounding Anne was thrown in good measure and that includes witchcraft and incest. It’s alluded to as a certainty in the novel which I don’t think was the right thing to do, a mere allusion would have sufficed for the sake of accuracy. I wonder what Henry would think if he were alive knowing that out of all his children, Elizabeth (A WOMAN) was actually the most successful of his children and probably one of the greatest monarchs England has ever had.

And don’t get me started on Jane Seymour. I know she’s presented as pure and good and a sympathiser of Queen Katherine. She may have been the opposite of Anne in terms of personality but she sure as hell did pretty much the same thing if we look at facts alone.

One thing I wish was included or at least alluded to was George Boleyn’s speech prior to his execution. As to George himself, he wrestles with, albeit weakly, following family ambitions and his own happiness. He’s presented in a more sympathetic light and I actually really liked his character and wished Gregory hadn’t presented the incest as a near certainty which the film did not follow (thank God!). Nonetheless, Mary is by far my favourite Boleyn. She’s perhaps the sanest of the three… and in the family. She’s the Sansa Stark of her siblings. But I have to admit, if the story rested solely on Mary it wouldn’t have been nearly as interesting. When you read a book on the Boleyn’s, you want to read about THE Anne Boleyn!

Other than that, I loved the way this was written. The language and dialogue was easy to follow and contained some heavy foreshadowing which I enjoyed.

What I learned from this book is that do not lay important things e.g. your LIFE, on chance. Think about the long-term consequences of your actions, adopt better methods than throwing tantrums by reading the person whom you’re experiencing difficulties with. What you do, comes back to you. When you try to create a new world, and give someone the tools to do it, don’t forget you’ve handed over the tools and thus you are no longer exempt from being damaged by the tools. Overall, I really enjoyed The Other Boleyn Girl which you can purchase here. I have now added The White Queen, The Red Queen and The Kingmaker’s Daughter to my Goodread’s bookshelf.

“She did not want George to know how deep this canker of ambition had spread inside her. She did not want him to know that she was not his beloved little sister any more but a woman who had learned to throw everything, even her mortal soul, into the battle to become queen.”

That’s enough from me now, thank you for reading and let me know your opinion on the Boleyns! You can check out my other reviews (Into The Water, The Impossible Fortress) here.